When you plan your Public Safety design with a BDA or Fiber DAS, an RF environment study or RF Site survey should be done to ensure you don’t have any interference or unwanted signals compromising your Public Safety BDA when commissioning. A common issue is nearby Sprint (now T-Mobile) or a FirstNet LTE Band 14 Tower with a high output power, which can cause issues on the Public Safety BDA. 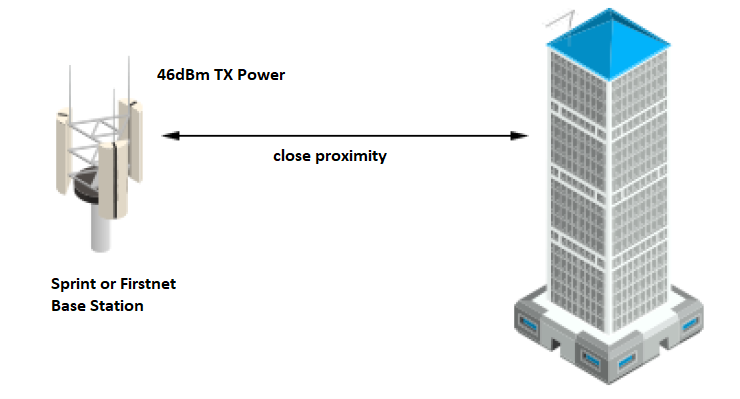 In the example above, a cellular base station tower with a transmit power of 46dBm is about 300 feet away from your building. With an estimated pathloss of 70dB, we would see a signal of -24dBm on the roof of the building. Now, with a standard Yagi antenna of 10dB of gain and assuming 3dB feeder loss, we would get -17dBm into the Public Safety BDA alone from the Sprint/T-Mobile tower. This can cause saturation of the low noise amplifier on the BDA or over drive the digital or power amplifier, which can degrade the quality of the public safety signal. You would also get a constant high input power alarm, even without seeing a programmed channel with a high input power. This is because a standard, off the shelf BDA will support FirstNet LTE Band 14 (758 – 768 MHz Downlink and 788 – 798 MHz Uplink) and the 800 SMR band (862 – 869 MHz Downlink 817 – 824 MHz Uplink). 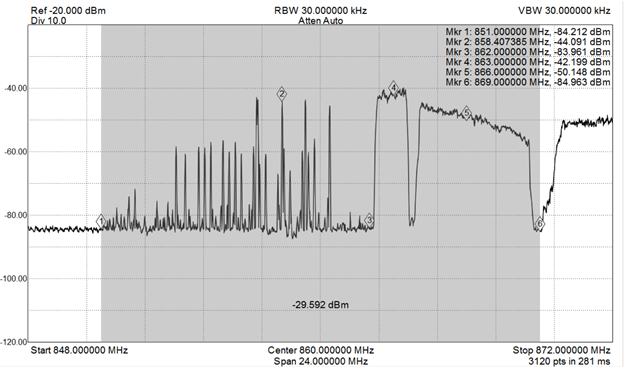 In the example screenshot above, we took a signal measurement at the input to a BDA showing the off-air rooftop signal. This is showing a strong interfering channel in the 800SMR band at Markers 4 and 5. [Writer’s Note: for wideband signals, to get an accurate power measurement, be sure to use the channel power measurement tool on your spectrum analyzer, not markers. The markers were only used for reference, while the gray outline shows a channel power measurement of -29.592 dBm for this signal].

Although you may not notice any issues doing a grid test, an input this strong will trigger the BDA ALC and give you unexpected performance when looking at the downlink output of the BDA. You might see a noise floor that is not flat, more intermodulation products than expected, wideband intermodulation products, or higher than expected spurious emissions. This is why it is always important to look at your wideband BDA input to understand all of the potential RF interference coming in, and the wideband BDA output to be sure you are only rebroadcasting a clean RF signal.

To reduce the input level to an acceptable level, you could use a simple attenuator to reduce the composite input power. This level should always be less than -30dBm, and it is recommended to have an input of about -50 to -55 dBm.

A better method would be to use a Public Safety filter with a narrower bandwidth. This filter will only attenuate the unwanted 800 SMR band (or LTE Band 14 on 700 MHz) with minimal losses to the public safety signal that we want to pass. The datasheet below for the Comba FP-78-IN2 Filter shows the 3 passbands we need for public safety narrowband coverage as well as rejection bands for the unwanted interfering signals.

In this example, the filter will pass the PS band from 851-861MHz and attenuate 863-2200MHz with a minimum of 45dB of rejection. To keep the size and cost of the filter as small as possible, the spec does not start at 862MHz for rejection, but there is a noticeable rejection at 862MHz on the filter. The result of using one of these filters is shown in the screenshot below. 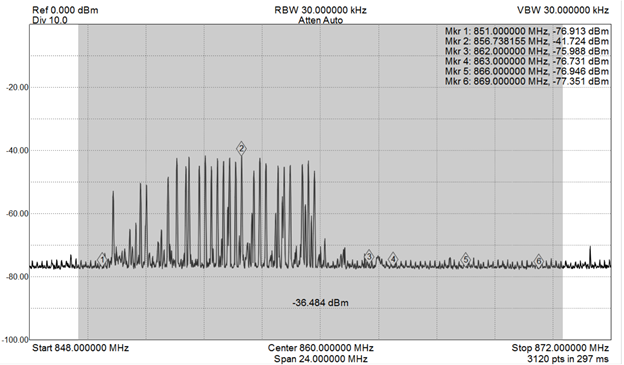 This will be even a bigger issue when you have a Public Safety Donor Site with a low off-air signal and a Sprint/T-Mobile 800SMR or LTE Band 14 FirstNet site nearby. Instead of having a public safety input of -41 dBm as shown in the screenshot above, you may have -60 or -70 dBm input signal. In cases like this, you would absolutely need a filter to get optimal performance out of your BDA, whereas in the first case an attenuator would work because you have a strong enough input power to reduce both the public safety and cellular signals while still retaining acceptable input power for both.

In addition to better performance on the downlink side, the uplink performance of the BDA will also improve. The uplink frequencies from LTE Band 14 and the SMR800 band are also supported in the BDA, and if the tower is close enough to cause a high input signal to our BDA, then we are close enough to cause uplink interference on their tower. The FP-78-IN2 filter eliminates the uplink noise in those two bands.

Uplink Output from the same BDA, with an FP-78-IN2 Filter: 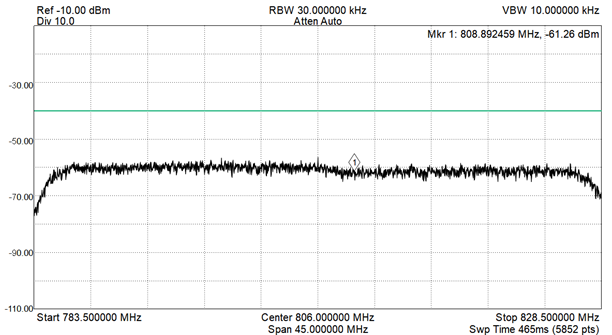 The two screenshots above tell most of the story – the uplink output of the BDA as it comes supports LTE Band 14 and 800SMR – to ensure we do not cause interference to the uplink bands on nearby towers, please use proper filtering!

back to top
More Tech Briefs