There’s a good chance that your next Public Safety BDA Emergency Responder Radio Communications System (ERRCS) will be located closer to a cell site than to your Public Safety repeater site. According to a report titled “The State of Wireless 2018” by ctia™, page 20, (11/09/2018), the US has seen a 52% increase in the number of cell sites between 2007 and 2017.

So why am I telling you this?  Simple. INTERFERENCE. In this same report, ctia points out that the “number of cell sites is poised to increase dramatically” as a result of network densification required for future 5G services. Small cell deployments have increased +550% from 2017 to 2018. This article also predicts that the current 86,000 small cells transmitting from street lights, utility poles, and from the sides of buildings today, will grow to 800,000 by the year 2026.

Yes, cellular signals are out-of-band and in theory should not affect Public Safety BDA, however all BDAs, whether analog or digital, have relatively wideband front-ends and are subject to strong out-of-band interference from cellular sites. AND…interference will get worse as we bring online new 700 MHz FirstNet band 14 and 700 MHz narrowband P25 sites.

That said, the donor antenna type and orientation could prove to be a valuable tool in fighting cellular interference.

Before we get into antenna theory, let’s first get familiar with the internal workings of a typical digital  Public Safety BDA. 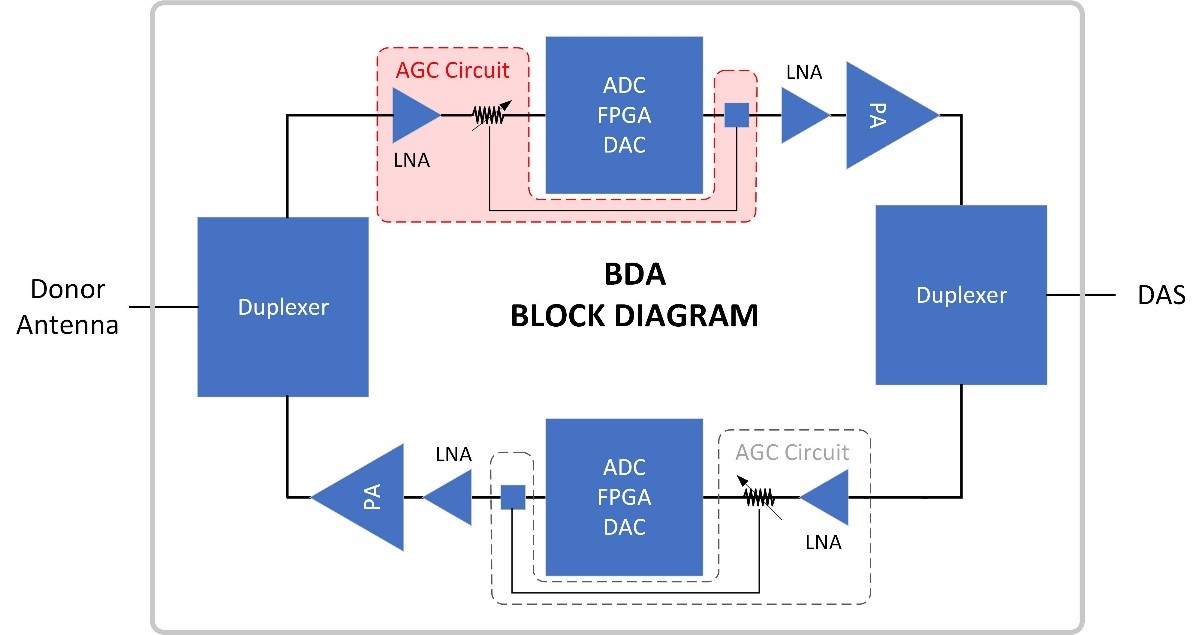 The BDA front-end consists of filtering (duplexer), Low Noise Amplifier (LNA), and Automatic Gain Control (AGC) circuit. These components are designed to limit RF and protect the BDA from damage or distortion.  Integrated duplexers generally do not offer adequate rejection to Sprint signals operating in the Enhanced Specialized Mobile Radio (ESMR) downlink band of 862-869 MHz.  Public Safety 800 MHz downlink band operates from 851-860 MHz, leaving a narrow 2 MHz guard-band. In some regions of the US, Public Safety entities are authorized to use the expansion band 860-861MHz, and soon they will be authorized to use the guard band 861-862MHz, which narrows the 2MHz guard-band down to 1MHz or less. The smaller the guard band the more difficult to mitigate interference through traditional filter methods. Consequently, Sprint sites located near Public Safety ERRCS sites can overload a BDA’s front-end.

Many of today’s BDA’s are FirstNet ready, meaning as AT&T band 14 sites are brought on line, these BDAs can enable band 14 through software settings. These FirstNet ready BDAs have a similar concern to that of the Sprint ESMR band interference in that their duplexers offer little or no rejection of Verizon’s upper 700 band C-block. In regions where 700 Public Safety narrowband or FirstNet band 14 systems are, or will, be prevalent, the possibility of saturating the BDA’s 700MHz front-end due to Verizon C-block transmissions is real and systems should be engineered accordingly.

Most BDAs on the market today include AGC circuits. The amount of AGC protection offered varies by product and manufacturer, however 60dB of gain reduction is a typical AGC value found in higher gain BDAs. The level at which AGC circuits are activated varies from manufacturer to manufacturer. One can typically expect AGC to be activated at composite input levels of around -50dBm.

While AGC can protect your BDA, it has some adverse effects as well. If wide-band AGC circuits, such as the one depicted in the BDA simplified block diagram above, are activated due to strong signals, then depending on the type of BDA (digital or analog, Class A or Class B) degradation to system SNR, and output power, can occur.

·         The Public Safety donor site is 4 miles away and our desired control channel signal level into the BDA is -75 dBm.

In this scenario, no survey of the site RF environment was performed and consequently the design engineer chose a popular low cost yagi antenna providing 10dBi of gain with a horizontal beamwidth of 65-70 degrees.  Even thought the cell tower is located 1/4 mile away and directed away from the ERRCS site, antenna gains from side lobes and low free-space loss produce a -30dBm at the frontend of the BDA. This is considered a strong signal and certainly poses a threat to our system performance.

Since AGC circuits generally activate at around the -50dBm level, and in this example the cellular signal level is -30dBm, we can expect about 20dB of gain reduction from AGC.  This 20dB of attenuation is applied to all signals, including the Public Safety signals. As mentioned above, the extent of degradation to system performance from this level of AGC attenution depends and many factors, including BDA Class, technology, power and gain, as well as application.

Class A and B digital BDAs generally can tolerate strong out-of-band cellular interference in part due to enhanced digital processing that dynamically adjusts gains to overcome wideband AGC circuits.  This is not the case for all manufacturers and does not apply to traditional analog BDAs. Analog BDAs are likely to experience noticeable SNR, gain, and output power degration in this scenario. 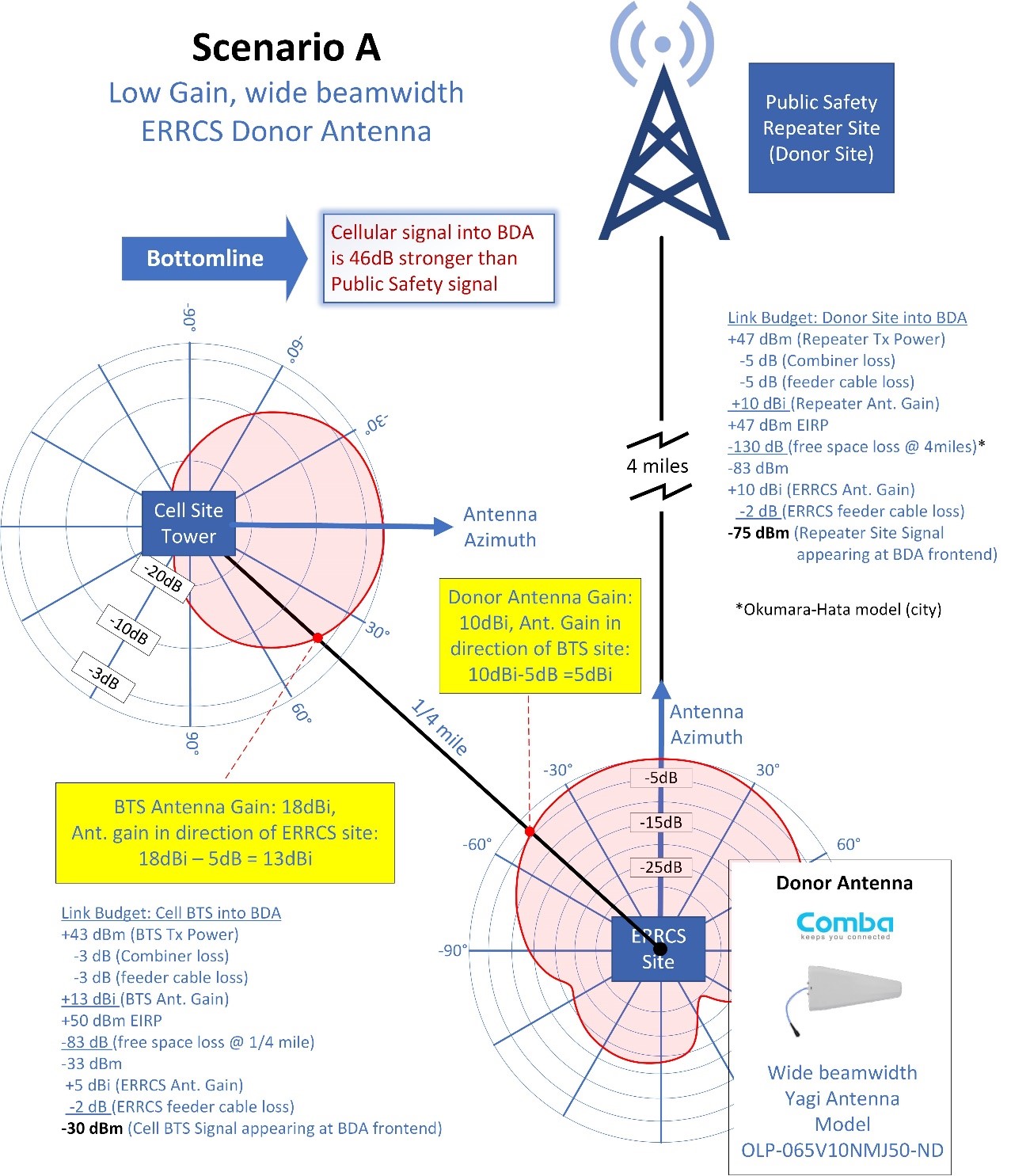 In this scenario we swapped a low-gain/wide-beamwidth antenna at the ERRCS site with a high-gain/narrow-beamwidth antenna. Notice how switching to the narrow beamwidth donor antenna has reduced cellular signal at the BDA from -30dBm to -47dBm (17dB improvement) while increasing donor signal from -75dBm to -70dB (5dB improvement). 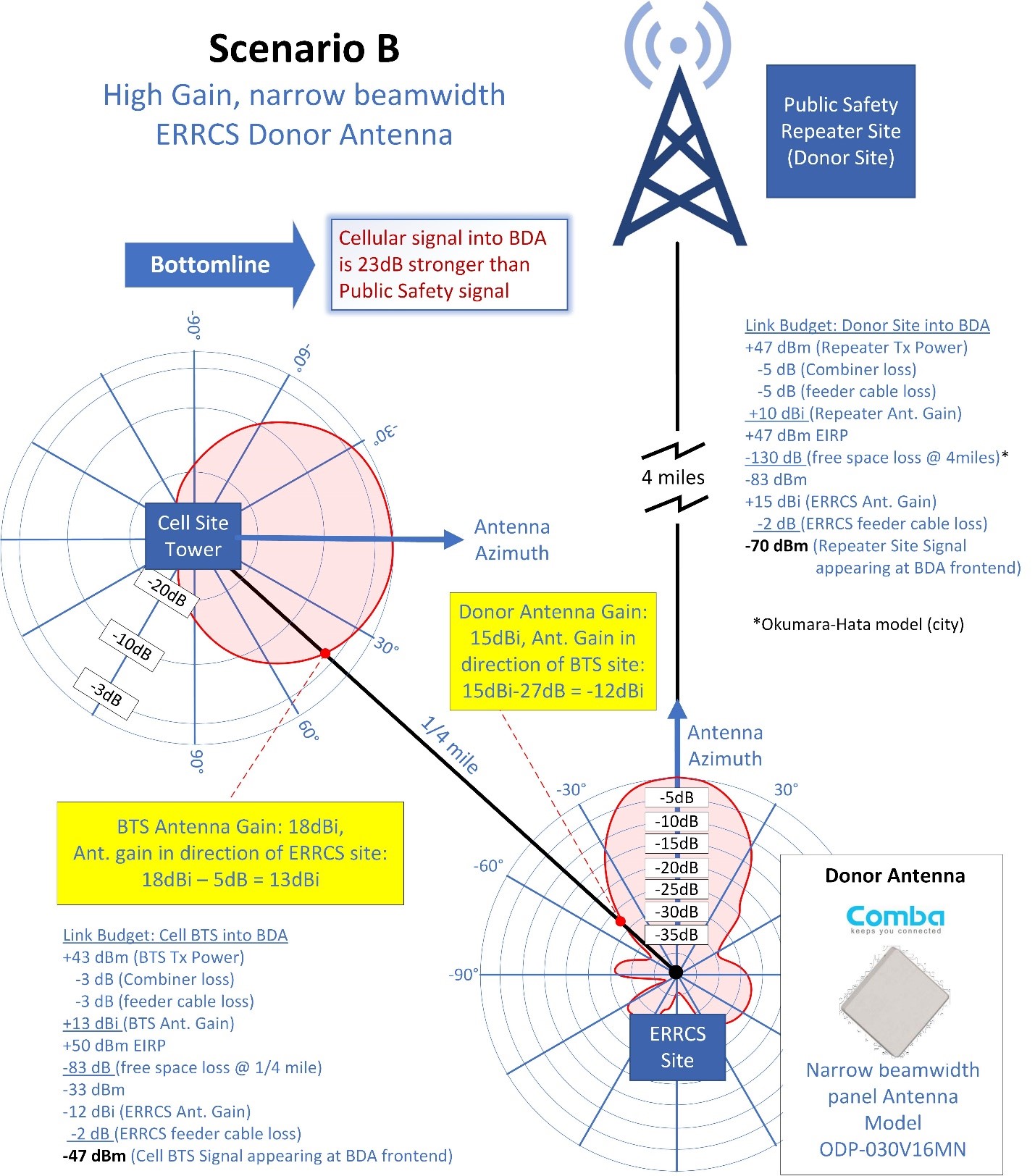 Our cellular interference has now been reduced from 46dB to 23dB, a substantial improvement. And while the cellular signal is still stronger than Public Safety, this level is only 3dB above the AGC threshold, which means our Public Safety system is only subjected to 3dB attenuation on the frontend.

In most cases digital BDAs can handle this level of interference with no degradation to system performance. However, BDAs with less sophisticated circuitry may require enhanced protection through the use of external filters, which adds cost and insertional loss.

In some applications we may find that by simply rotating the donor antenna slightly can place the interfering signal in the null of the antenna pattern and result in better rejection than the alternative, which would entail adding external filtering.

Refer to Scenario C to understand why rotating the donor antenna qualifies as a good commissioning tip.

Notice that rotating the antenna by 10 degrees has closed the gap between cellular and Public Safety signal strengths by 8dB. But more importantly, the cellular interferer is now well below the AGC threshold. 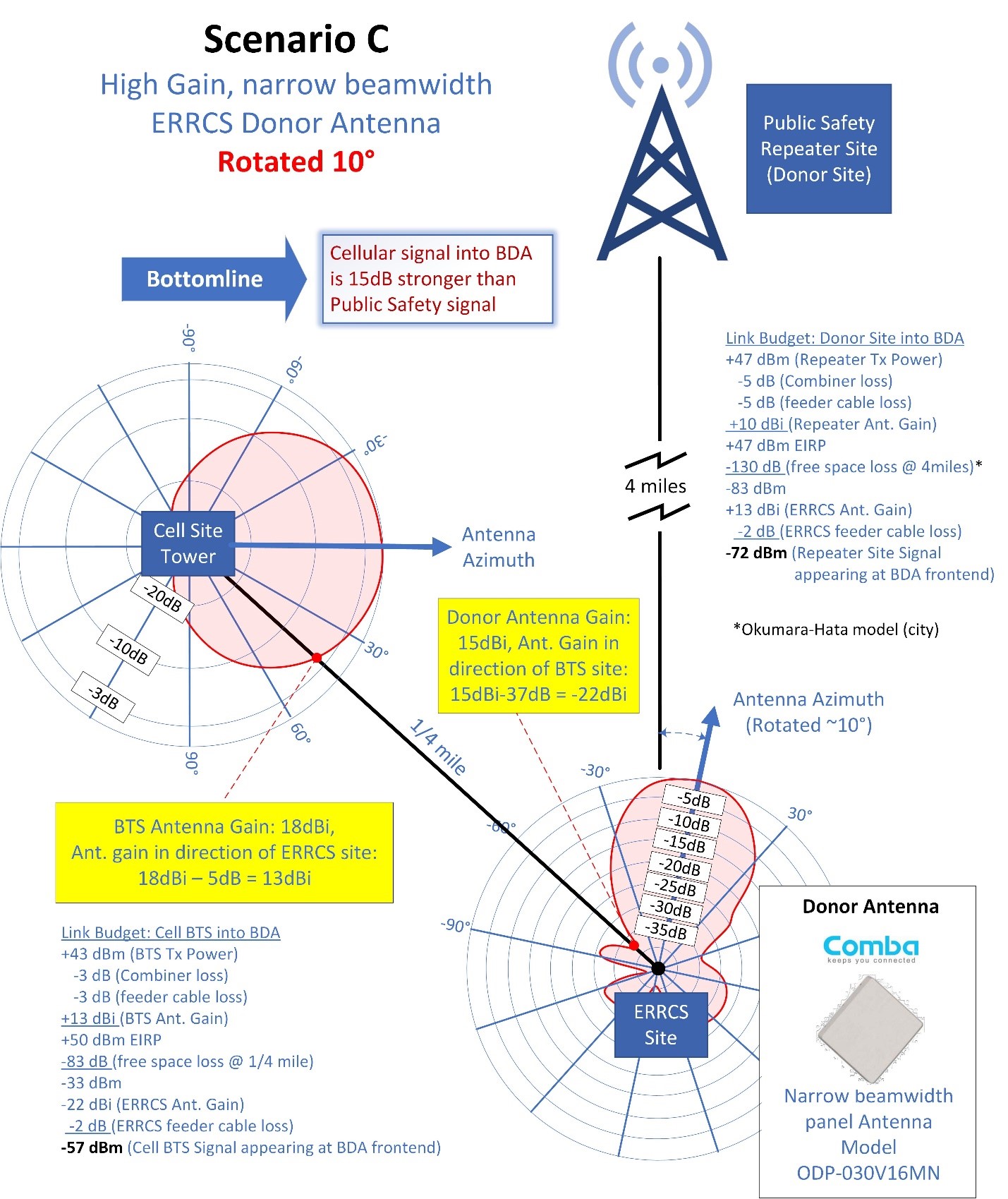 The moral of this story is be prepared! Increase the span on your spectrum analyzer and confirm Sprint ESMR and Verizon C Block won’t wreak havoc on your Public Safety system. If there’s a risk, don’t be cheap - select a high-gain, narrow-beamwidth donor antenna such as Comba’s 30°, 16dBi model ODP-30V16MN, or similar. We have illustrated in the examples above that by selecting the right antenna and optimizing orientation, cellular interference was lowered by 27dB.

While this commissioning tip may seem minor, the quality and performance of BDAs varies from manufacturer to manufacturer and this seemingly simple tip could go a long way in solving not-so-obvious saturation issues and the grief that goes along with it.