The Importance of Preplanning of a Public Safety Communications System

Installing an in-building public safety communications system is more than just simply mounting a BDA/Fiber DAS along with a donor antenna, coax, splitters and service antennas and turning it on.  There’s so much more that goes into planning of a successful system before it’s commissioned, passes AHJ testing and issuance of the Certificate of Occupancy to the building owner.  This short Tech Brief will cover important aspects that SI (System Integrator)/installers shouldn’t over look when planning a public safety project not only to install a compliant public safety communications system, but also save valuable time and money.

Before handing over the floor plans to an iBwave designer it’s imperative that a copy of the most recent Ordinance acquired.  More importantly it’s highly suggested that it’s verified with the local AHJ (Authority Having Jurisdiction)/Fire Inspector to ensure this is the most recent ordinance.  This document will communicate all the requirements that the SI is expected to support in the ERRC System.  This includes what fire standards they have adopted, ie. NFPA 72/1221 or IFC 510, if the AHJ requires fire submittal plans for approval, as well as any additions/deletions to the code that the AHJ mandates. There have been instances where an SI has assumed they had the most recent Ordinance, but found out during the inspection that something was amended and ultimately didn’t pass.  By doing this one little task can save both valuable time and resources costing hundreds to thousands of dollars.

Once the latest Ordinance has been verified, performing a physical site survey is the next step to designing the actual system.  The survey is essential in gathering the building’s actual inside/outside RF environment and to bring it into iBwave.  One of the most important readings would be the exterior  power levels coming from the public safety base station as its crucial to setting the baseline for the whole design of the public safety communications system.  Assuming rather than obtaining actual readings from the start may cause problems when trying to tune and commission the system. For example, say the nearest public safety base station antenna is 10 miles away and emits xx dB with a clean lineofsite.  Theoretically you could assume the signal arriving at the donor antenna will be xx dB attenuated from the free space loss, however, one might miss that there is a large body of water or buildings nearby that refract and reflect signals causing signals to degrade faster than just free-space loss.  This could have significant effect on whether there is ample signal at donor antenna or if a higher gain, more directional panel antenna would be a better choice. 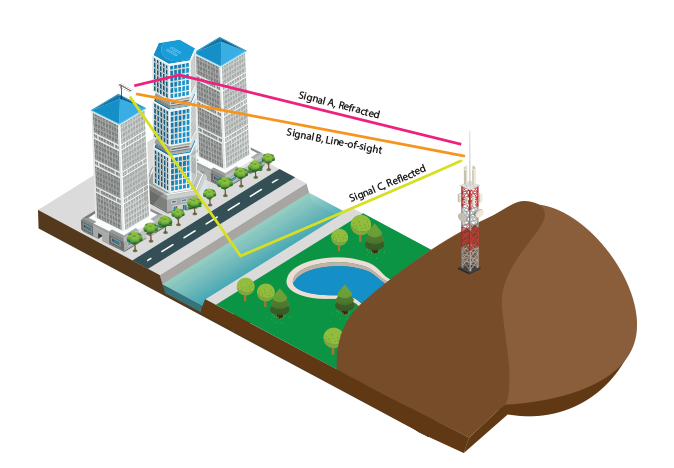 Another important aspect to know about the RF environment is whether there is already a commercial repeater/DAS system and if there’s a need to mitigate potential interference issues.  Both Verizon’s upper C block and Sprint’s 800 bands are adjacent to some 700/800MHz public safety channels as shown in Figure 1 below.  This situation would require a very sharp filter to protect the commercial signal.  Knowing ahead of time means one can properly budget and mitigate the signals using proper rejection filters.  Commercial DAS is a form of Public Safety communications and every effort should be made to protect it from ERRCS interference. Designing for operational harmony between commercial DAS and Public Safety ERRCS can help with timely issuance of Certification of Occupancy and minimal cost overruns.

Future proofing a building for planned services is also another consideration when designing a public safety system.  A building might not have a commercial wireless system currently, however if you know the building owner is looking into it, there are a few things to consider.  First are the possible interference issues that could arise mentioned in the previous point, but also if this is a co-located system, where both signals are shared on a single coax infrastructure, special attention needs to be placed on the uplink signal to ensure the systems overall gain is enough.  This also includes AT&T’s FirstNet LTE public safety network band.

With a little planning at the start of a public safety project, the SI in the end can provide the end-user a better designed system that meets the AHJ’s requirements, that can be completed on time and budget without any costly change orders.

Downloads: The Importance of Preplanning of a Public Safety Communications System