Why CODE just made the DONOR antenna a ROCK STAR

The Donor Antenna: possibly the most overlooked and underappreciated component of a Public Safety in-building coverage system. We tend to give little thought to the selection of a donor antenna. We don’t necessarily care whether it has a radome, or the quality, or color, as long as it has about 10dBi of gain and costs less than $150. Well, considering recent changes to the IFC code, we may want to be a bit more discerning about this little gem called the donor antenna.

In the new IFC 2018 code section 510.5.3.8 it states that “Systems Incorporating Class B signal-booster devices or Class B broadband fiber remote devices shall be tested using two portable radios simultaneously conducting subjective voice quality checks. One portable radio shall be positioned 10 feet from the indoor antenna. The second portable shall be positioned at a distance that represents the farthest distance from any indoor antenna. With both portable radios simultaneously keyed up on different frequencies within the same band, subjective audio testing shall be conducted and comply with DAQ levels as specified in Sections 510.4.1.1 and 510.4.1.2.”

Historically, Public Safety in-building coverage systems design criterion has been limited to defined downlink signal strength, meaning that once you’ve designed for acceptable downlink coverage, the uplink is pretty much guaranteed to work given the fact that portable devices transmit higher per-channel power than a BDA. This is no longer the case.

Kudos to the Safer Buildings Coalition (SBC) who have been instrumental in addressing ambiguity in the code as well as helping to improve the quality and reliability of First Responder radio communications. The section of code listed above is a perfect example of an SBC fix to a loophole that for decades has put lives at risk. Simply put, if Responder #1 keys up a portable radio positioned near one of the many indoor antennas that makes up the passive DAS, and a second responder is positioned some distance away, say 70 feet, then it is likely that Responder #2 may not be able to communicate with the repeater site. This occurrence is most prevalent in Class B (broadband) signal booster devices which inherently reduce their gain to accommodate Responder #1 while leaving Responder #2 vulnerable with insufficient gain to reach the repeater site. This occurrence is commonly referred to as the near-far effect in Public Safety in-building systems.

So, what is the connection between the near-far effect and the Donor Antenna’s rise to stardom? Well, for one, the AHJ’s are getting more technically proficient.  AHJ’s are adopting national codes such as NFPA 1221 and IFC 510 at an alarming rate and they are no longer settling for just a typical subjective Delivered Audio Quality (DAQ) test, but rather proof of compliance. A prerequisite to demonstrating compliance using two-radio testing--as defined in code--is often the dreaded link budget. To understand the critical part that the Donor Antenna plays in the overall equation, let’s examine the following link budget:

Column 1 in the following table correlates to subsystem numbers in the link budget graphic in Figure 1. Table 1 below shows that with a portable positioned approximately 10ft. from any indoor antenna, the maximum uplink gain for this scenario will be limited to 64dB. This is due to the BDA’s AGC circuitry reducing gain to protect itself from saturation. The near-field portable (Responder #1) will have the BDA’s full power available to reach the repeater site 5 miles away and deliver a respectable -68 dBm into the repeater’s receiver. 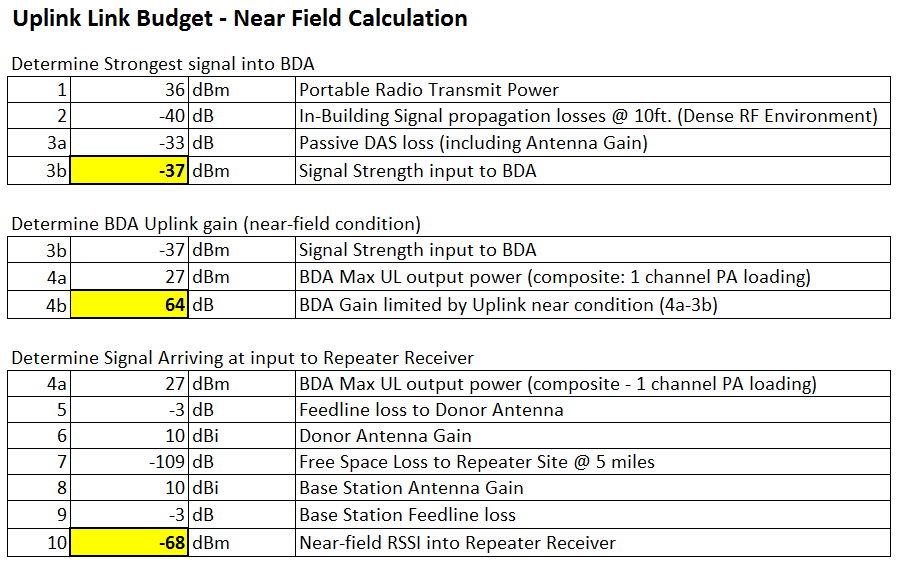 From the link budget calculation above we have established that sufficient power and gain are available for Responder #1 to have reliable communications with the repeater site. Now let’s look at what happens when Responder #2 keys radio simultaneously while Responder #1 is communicating. 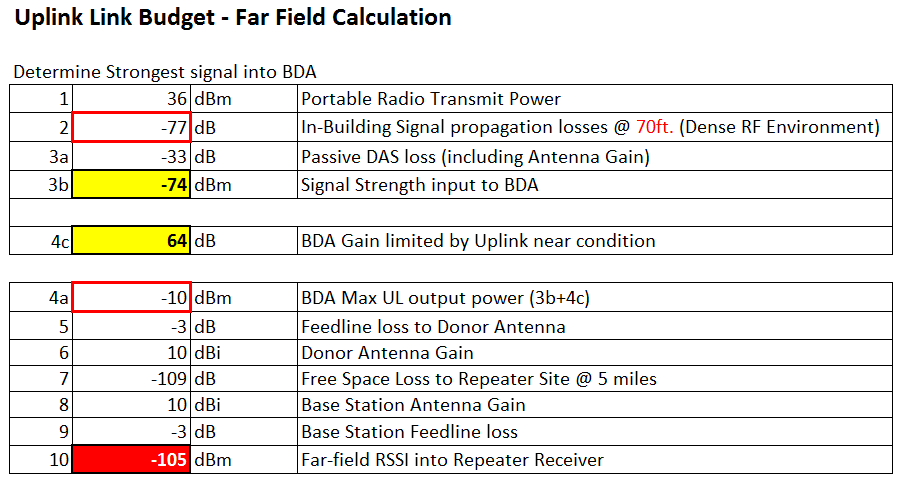 Based on the 15,000 square feet of coverage per indoor antenna parameter, the farthest distance from any antenna a portable can be positioned is approximately 70ft.  Considering the density of the RF environment, we can expect about 77dB of path loss between the portable and the nearest indoor antenna. Add the fixed gain of 64dB, as established by the near-field calculation (Table 1, line 4b), and The resulting EIRP from donor antenna is -3dBm, which results in a receive signal level at repeater site of -105dBm.

Many AHJ’s require -95dBm minimum level into a repeater. This example scenario passes the 95% downlink coverage test with ample margin, however, most AHJ’s will fail this system due to poor uplink performance.

Here’s where the Donor Antenna “Rock Star” status gets earned. There are several high-gain, high-isolation antennas on the market today. As you can see from the new link budget calculation in Table 3 below, we did nothing more than replacing the 10dBi donor antenna with a 20dBi donor antenna and voilà, the AHJ blesses the system, reliable uplink communication is established, first responders are happy, and you can now get paid. 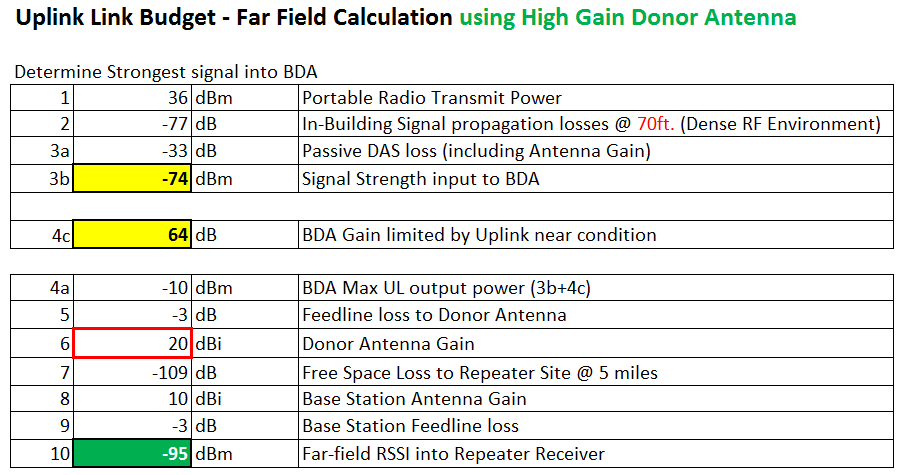 The moral of this story is that the rules have changed, AHJ’s are more in tune with how to qualify an in-building system, and consequently, our traditional design approach must change.  It’s time to do the math…literally.

ANOTHER PLUG FOR THE ROCK STAR: Another benefit that the high-gain, high-isolation, donor antenna brings to the table is isolation. Improved isolation between indoor antennas and donor antenna can result in higher BDA gain. Higher gain can lead to more output power. Higher output power can help meet coverage criteria.

CHANNELIZED: If for whatever reason that higher gain donor antenna is not the answer, as may be the case for applications where the repeater site is >5miles away, consider the use of a channelized (Class A) signal booster device. Class A BDA’s have independent gain circuits per channel and are less susceptible to the near-far effect. IFC Code authors have recognized this and as such, have allowed Class A devices to be exempt from the near-far effect code compliance testing (refer to 2018 IFC code Section 510.4.2.8).

Another major bonus to using a Class A device is reduced antenna density. Simply put, given that each channel in a Class A system design has its own gain circuit and is virtually immune to the effects of near-far, system designers can design using fewer antennas. Fewer antennas mean fewer directional couplers, splitters, connectors, cables, ultimately resulting in lower installation cost. So, in the end, don’t shy away from a channelized device because of the cost. You may find greater saving going with a Class A device than not.

While the Safer Buildings Coalition did a stellar job on the latest code changes, was it enough? Yes, addressing the near-far issue was a win for the safety of our First Responders, however, the defined test process does not emulate a real-world scenario. What happens to the uplink output power from a Class B BDA when an incident happens and the loading on the in-building system is heavy? Let’s use an example of 50% loading on a system during a time when lives are at stake. Consider a 24-channel trunked system where 12 of the uplink channels are being used during an incident. If that building utilizes a Class B device, the actual output power per channel would drop by ~8dB compared to the two-radio test currently required by code. If we go back to the link budget in Table 3, line 10, that -95dBm level, which previously was acceptable, could now drop to -103dBm under 50% loading. Will -103dBm into the donor site’s repeater meet SINR, DAQ, and reliability requirements? Probably not.

In the meantime, how do AHJ’s protect our First Responders until the next code revision?  Answer: By allowing the use of Class A devices.

Comba offers a variety of Class A and Class B devices, including Class A Fiber Remote Units. Need help with your next Public Safety In-building project, or your next link budget? Comba has both pre and post-sales engineering support services to help you navigate code and design challenges.

Downloads: Why CODE just made the DONOR antenna a ROCK STAR